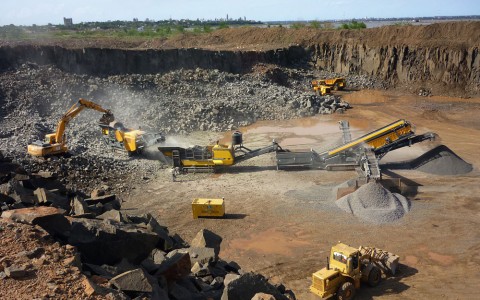 Vietnam is endowed with a wide variety of minerals over 5000 deposits of more than 60 types of minerals have been discovered so far, including energy minerals, as well as industrial and construction materials. Also, the country has great coal reserves with many basins mainly in Thai Nguyen, Song Da, Nong Son, and the Red River. The Quang Ninh coal basin’s reserves of three billion tonnes have been exploited over the last 100 years.

Such prospects incite many foreign companies to flock to 2016 Mining Vietnam Expo to showcase their latest equipment, machinery, and products. This year, according to the organisers, the exhibition has attracted 171 exhibitors from 22 countries and territories, including six international group pavilions from the UK, the Czech Republic, Singapore, China, and Australia.
In addition, many renowned exhibitors in Vietnam joined the expo to look for new technologies, partners, and customers, the biggest name include Rieckermann, Vinza Corporation, Bosch Vietnam, Source of Asia, and Vinacomin.
Officially opened for the first time in 2012, Mining Vietnam is the most reliable exhibition in the mining industry in Vietnam, bringing together a large number of supply units all around the world. In the framework of the event, two conferences were held to discuss solutions that improve mining productivity as well as searching for new products and ways to improve safety standards in daily mining work.