USING “COMPANY” AND “ENTERPRISE” FOR BUSINESS HOUSEHOLD’S NAMES IS PROHIBITED

This is one of the contents regulated under the Circular No.01/2013/TT-BKHDT dated January 21, 2013 of the Ministry of Planning and Investment guiding the enterprise registration.

Accordingly, business households may not use the word “company” and “enterprise” in their names. Names of business households are in the alphabet used for naming business households as prescribed. This Circular also contains some important regulations on updating information about local enterprises in the National Enterprise Registration Database. Accordingly, the Ministry of Planning and Investment requested that every quarter and every year, based on the information about local enterprise registration, and existing information in the National Enterprise Registration Database, Provincial Business Registration Offices are responsible for reviewing and comparing with the local information to convert and update the missing information in the National Enterprise Registration Database. This Circular takes effect on April 15, 2013 and supersedes the Circular No. 14/2010/TT-BKH dated June 04th 2010 of the Ministry of Planning and Investment.

On February 08, 2013, the Ministry of Finance issued the Circular No. 16/2013/TT-BTC guiding implementation of the extension of time limits, reduction of a number of state budget revenues according to the Government’s Resolution No. 02/NQ-CP, of January 07, 2013 on a number of solutions to remove difficulties for business production, market support, settlement of bad debts.

EXPENSE FOR SUPPORT TO SETTLE POLICY OF REDUNDANT EMPLOYEES

Under this Circular, for the enterprises of equitization, business sale: the Fund only supports the funding to solve policy for redundant employees when the revenues are lack from equitization, sale of enterprises in accordance the law provisions and not enough to pay; For enterprises of dissolution, bankruptcy: the Fund only supports the funding when revenues from the dissolution, bankruptcy under the provisions of the law are not sufficient to address policy for redundant employees. Subjects are supported including: employees who are lost or leave their job; The titles of members of the Council of members, the company’s president, General Director, Deputy General Director, Director, Deputy Director, Chief Accountant, Controller of companies due to the implementation of the arrangement, conversion. The Circular clearly stated that enterprises receiving the funds are responsible for making payment to the employees and making report of funding settlement ass prescribed. After the time limit, if the units receiving funds have not performed the fund settlement report to the Fund, they shall have to send written explanation of the reason and shall have to complete report to send to the Fund for a period of not more than 30 days from the overdue date to submit report as prescribed. After 30 days, if the enterprises do not
send fund settlement report, the Fund management Agency is responsible for enforcement, recovery of the funds supported.

This Circular takes effect from March 10, 2013 and replaces the Regulation on management and use of the Fund for support of enterprise arrangement in the Groups, the State Corporations, the parent companies issued together with the Decision No. 09/2008/QD-BTC dated January 31, 2008 of the Ministry of Finance

This Circular takes affect from July 01, 2013 and replaces the Decision No. 51/2007/QD-NHNN, of December 31, 2007 of the Governor of the State bank on promulgation of Regulation on credit information activity.

BANKS MUST SELF-IMPLEMENT CLASSIFICATION OF DEBTS AT LEAST EACH QUARTER

RESTRAINING THE EXTENSION OF CREDIT INSTITUTION NETWORK IN 2013

This is regulation under the Directive No. 01/CT-NHNN of the State Bank of Vietnam dated January 31, 2013 on organization to implement the monetary policy and assuranace of safe and effective banking operation in 2013. Of which, the notable content is requirement on strengthening examination, inspection, supervision of monetary market and banking activities.

Specifically, strengthen examination, inspection with respect to credit institutions, concentrating in the contents: Financial and ownership situation; transfer of shares; contributed capital, foreign currency and gold business; capital mobilization, inspection and supervision of risks of subjects of banking inspection and supervision in order to earlier detect, warn risk of each credit institution and whole system; strictly manage establishment of new credit institutions and extension of credit institution network; to restrain extension of credit institution network in urban areas; Besides, the State Bank also requested that credit organizations must implement solutions to expand credit effectively in order to support the economic growth at a reasonable level, contributing on controlling inflation, removing difficulties for production business, the market support such as: prioritize to concentrate capital in order to support loans in agriculture, production of exports, support industry; To consider to keep a rational quantity of capital on loans for subjects purchasing social house, enterprises changing the use of investment project to project on social house with a reasonable interest rate; At the same time, reduce maximally cost for management, advertisement, promotion and operation cost in order to have condition to reduce loaning interest rates aiming to share difficulties with borrowers. This Directive takes effect as from the day of signing.

Accordingly, construction contractors and equipment suppliers are responsible for carrying out warranty for construction works and equipment. The warranty duration will be counted from the date that Investors sign the acceptance minutes to put construction works and items into use or based on the conditions specified in the construction contracts but not less than 24 months for
works of special grade and grade I and not less than 12 months for works of other grades. For dwelling house, warranty is still implemented based on Article No. 74 of the Law on housing; Specifically, at least sixty months for condominiums of nine or more storey and houses of other types which are constructed with the state budget investment; At least thirty six months for condominiums of between four and eight storey; at least twenty four months for other types of houses. Besides, the Decree also guided in detail on classification and grading of incidents, reports of incidents. Specifically, based on the damage to human and property, incidents are graded into 4 levels, including: particularly serious level, level I, level II and level III. Immediately after incidents’ occurrence, Investors must briefly report to communal level People’s Committees and Investors’ senior agencies by the quickest way and Within 24 hours after the incidents occurred, Investors prepare and submit reports on incidents in writing to District-level and Provincial People’s Committees where facilities’ incidents occurred. At the same time, the dismantling and clearance of incident scenes must be conducted with the agreement of competent agencies under regulation and must satisfy the following requirements.

When the works is detected to have uninsured quality with the risk of collapse or to have unsafe construction method, State authorities on construction are entitled to temporarily stop the construction and then allow the construction to be continued only when Investors and contractors make good their shortcomings and assure the safety.This Decree takes effect on April 15, 2013, and replaces the Government’s Decree No. 209/2004/ND-CP dated December 16, 2004 and the Decree No. 49/2008/ND-CP dated April 18, 2008

APEC BUSINESS TRAVEL CARDS SHALL BE VALID FOR 3 YEARS

On January 30, 2013, the Ministry of Public Security promulgates the Circular No. 07/2013/TT-BCA amending and supplementing a number of points in the Circular No. 27/2007/TT-BCA, of November 29, 2007 of the Ministry of Public Security guiding the issuance, amendment and supplementation of ordinary passports granted in the country and the Circular No. 10/2006/TT-BCA, of September 18, 2006, of the Ministry of Public Security guiding implementation of the Regulation on issuance and management of the APEC business travel cards. Under this Circular, the Ministry of Public Security regulated that Vietnamese business people who want to be re-issued the APEC business travel cards (ABTCs) must have ordinary passports with time limit of at least three years from the day of submission of dossier requesting for card issuance. ABTCs shall be valid for 3 years. Meanwhile, according to the previous regulations, APEC business travel cards which are valid in 3 years must depend on the remaining time of the passport). If a person requesting for re-issuance of ABTC due to expiration and agency, enterprise, where such person is working, has a written confirmation that there is no change of title and job position in comparison with previous time of request for card issuance, it is not required to submit a new
written permission of ABTC use eligibility from competent authority. 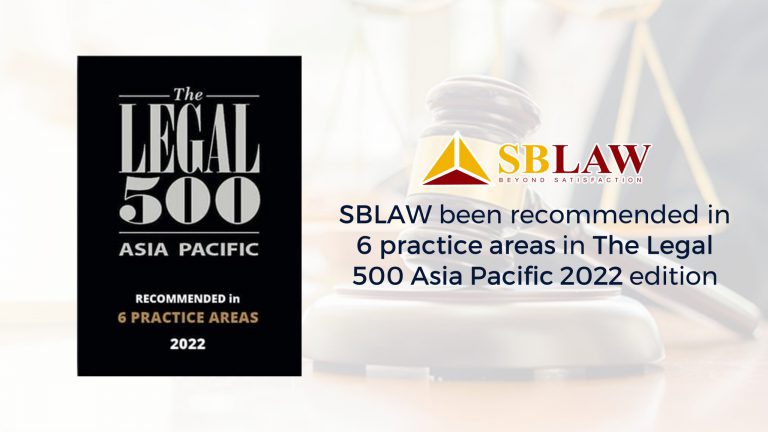 SBLAW continues to be ranked TOP TIER by The Legal 500

It is our great honor to share that SBLAW has again been named a TOP-TIER FIRM in The Legal 500 Asia Pacific 2022 Edition, with